Nearby the first tier is a nipa hut; perfect for picnic and some idle time but you have to be ready with some anti-mosquito lotion as they might make you their snack.

Walk a few steps further down and you will reach the first tier of the waterfall –the widest among the first three tiers –its water is crystal clear filled with small and giant rocks.

To its left are steep stairs with side ropes that lead you to the second level.

The tour guide, Kuya Dong, tells me that the third tier is worth seeing. And when locals say so, you just have to see it for yourself.

The climb to the third tier is similar to the second one, only it is more steep and you have to swim first before you reach the stairs with rope on the sides.

On the third tier, a basin will greet you with water pouring in and out of it. The water cascade is silver at its edges, clear as an angel’s tears but its depth, unknown.

The brave ones could opt to jump dive on its edges but take heed as it’s slippery.

When lucky, rainbows will go peeking in at the bottom of the drizzle.

On a hot Tibiao day, take a dip at the waters and explore further to the fourth until the seventh tiers, and see just how far you could go.

Afterwards, take a relaxing Kawa Hot Bath either in Kayak Inn or in its alternative Peter’s Lodge which is located just by the entrance of the falls –one overlooking the green fields. 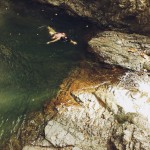 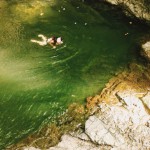 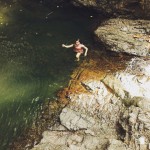