One hot afternoon, during the first week of February last year, my friends and I went to Baler mainly to surf, try out their buffet offerings, and of course, to taste their famous peanut butter. But a part of our itinerary was also to see a Balete tree.

Well, locals say that it is not an ordinary tree as it is the biggest of its kind in the continent.

Located thirty minutes away from the town proper of Baler, the tree cradles in the arms of its neighboring town, Maria Aurora.

Using a tricycle we rented for P400 (good for three to four pax), which already covers the easy to go to tourist spots in the area for half day, off we go to see the famous spot. 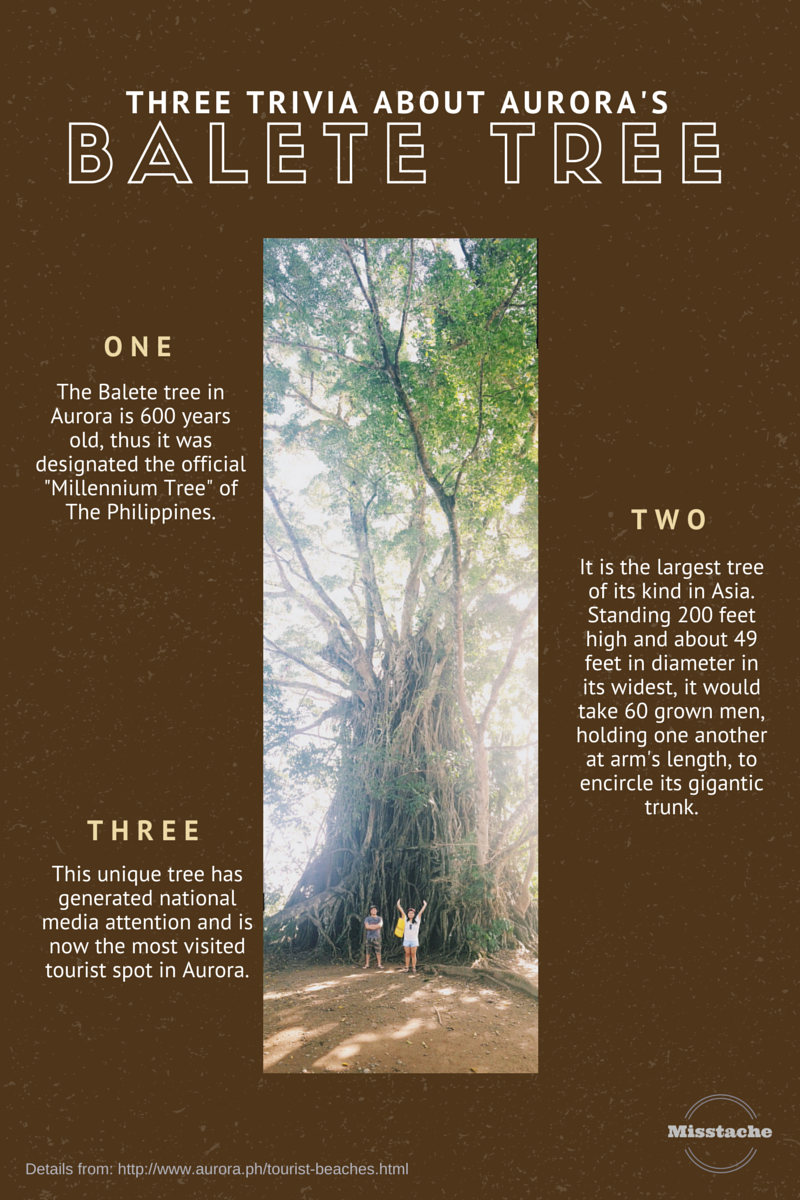 When we arrived, the tree was indeed big, the panorama picture I took could not suffice as a proof.

Standing 200 feet high and about 49 feet in diameter in its widest, locals say that it takes 60 grown men, holding arms of one another, to encircle the enormous trunk of the 600 year old Balete tree.

Residing just a few steps away from the tree is a mini collection box for the maintenance fee of the park.

After a couple of snaps here and there, we noticed some people — from as young as five years old to the not quite old –getting out of the humongous roots of the tree.

Yes, they entered and climbed it!

We didn’t know it’s allowed to climb it and besides, it looks scary. For one, Balete trees are known as strangler figs wherein it encircle its roots around another tree, enveloping it, and in the process killing it. Two, legend has it that this type of tree is also the home of fairies, tikbalangs (half-human and half-horse), and other supernatural elements.

So, what if something happens while we’re inside it?

But of course the tour guides said it’s perfectly safe to climb it.

If there’s one thing I developed over my courses of travels, it is the mindset of being in the moment: when you’re traveling, take some risks, get out of your comfort zone, and be spontaneous. Otherwise you would regret it and it would be a hard battle with yourself. It may not be always easy but it pays off everytime.

So we did, slowly but surely.

It took us a roughly 15-20 minute climb but the tour guides say that it only takes an average of eight seconds for them to go up. Yes, I repeat: eight seconds, not eight minutes. Can you beat that? I can do that for six seconds, in my dreams.

While we were on top of the tree, we heard a Katy Perry song playing on the radio from down below. Other than that, you can also feel the wind smoothly caressing your face. We could also see the vast amount of greens below that is pleasing to the eyes and then when you look above, you’d see branches and leaves, of course, lol, no, you could see the clear blue sky.

It’s nostalgic. I remember when I was a kid, one of my dreams is to have a tree house. In a way, this experience have fulfilled that dream.

But alas, I’ve been told recently that climbing the tree is no longer allowed. In late February last year, maybe only a week after we climbed, the activity has been prohibited –not because we were so heavy that the branches couldn’t take it anymore, but because when we climbed, we already saw some fungi growing in the trunks and branches. This made the branches a bit slippery and harder to hold on to, making it difficult to climb. So to preserve lives, both of the tree and of the people wanting to go up, climbing is now prohibited.

You can still visit it though, and be amazed by the wonders of nature. With roots even bigger than you, a trunk you couldn’t hug from arms to arms, and basically a tree that keeps on giving –who wouldn’t fall for its beauty?