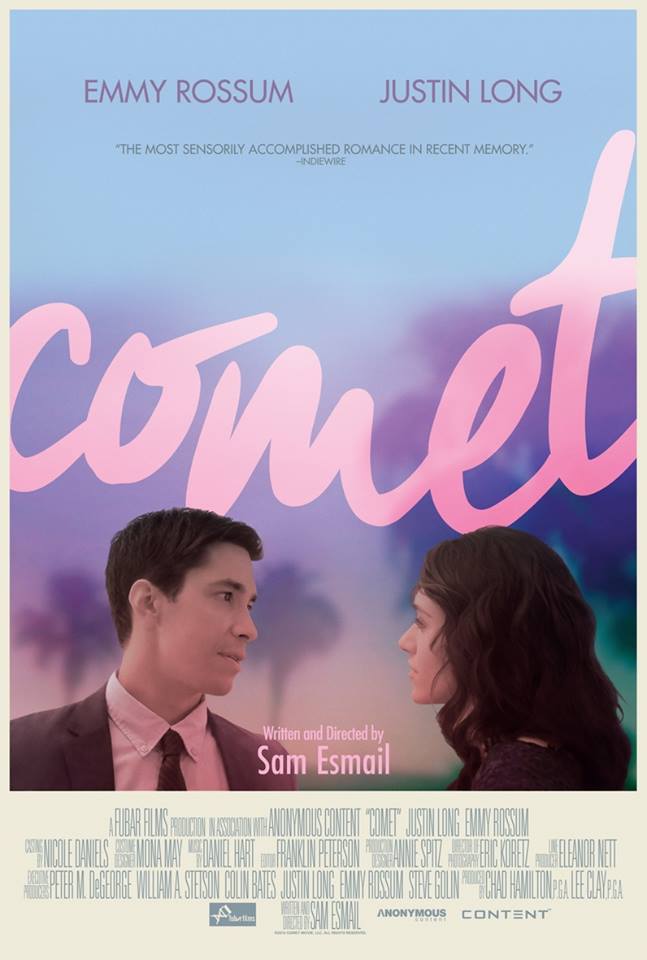 Comet is a simple story about love told in a way that reminds me of three films.

First: 500 days of Summer. The use of montage in Summer and Tom’s relationship. Second: the Before trilogy, wherein we see the story focusing only on two characters, Celine and Jesse, who meet, part ways, and reunite after a long time. And lastly, the Eternal Sunshine of The Spotless Mind, wherein we see Clementine and Joel’s relationship in varying degrees of realism and dreams.

Comet is basically a compressed mixture of all these three.

What makes Comet special is the treatment. Sam Esmail’s screenplay and directorial debut is promising in many ways than one. The characters are given complex, mostly philosophical dialogues, with Dell (Justin Long) often having a mile per minute speech and Kimberly’s (Emmy Rossum) quick-witted response every time. It is sharp and witty, both fun and hard to watch as they would be easily grasped if read on a page of a book.

Dell is a “five-minutes-from-now” kind of person. To him, “always is scary.” He hates people who thinks he’s too negative. On the surface, he can read you like he’s Sherlock Holmes. He has passive aggressive behavior and narcissistic personality disorder. He has the urge to always be right; essentially he’s an insensitive guy who doesn’t believe in love but falls deeply in love, anyway.

Kimberly on the other hand is a “now” person. She hates the concept of time –the presence of beginning, middle, and end; the feeling of restriction. Most of her reactions are based on Dell’s actions. Her favorite song which she sings fondly, an iconic Roxette love song, suits the film perfectly.

From here we see the timeline jump from one to another.

While the film suggests that the whole plot takes place within a dream, it also counters the idea at sporadic instances, especially early on wherein the opening lines delivered by Dell says “this is not a dream,” repeatedly. Possibly, what we see here are actual memories or maybe even made up memories after a certain event, which is a fact that comes off as too clever but also engaging, nonetheless. There’s a vibe in the film that keeps you going along, continuously guessing on whether they will actually end up together or not.

The time hop technique it uses smartly highlights the way in which we go over the various parts of a relationship through a malfunctioning digital VHS effect, lingering frames, and cross-cutting of words. Credits to the editor Franklin Peterson for avoiding the confusing pace that it could easily fall into and the camera works by Eric Koretz that showcase unconventional, off-centered angles which are also all pleasing to look at. Then there’s also the diverse but well suited musical scoring– from the electric “Eyes like the Ocean” to the wistful “It Must Have Been Love” to the polarizing “Love More” cover of Bon Iver which suits the fantasy-realism it tries to pull off.

Ultimately, Comet may seem like a ripoff of the previous films mentioned but it remains original in various aspects. It features amazing performances from Long and Rossum that if only given the right balance of optimism and pessimism, one would appreciate it.

“To the brain there’s no difference between reality and dreams… they were just memories of us over the years.” – Dell

Comet is showing in Philippine theaters starting February 25 and is distributed by Solar Pictures Philippines.