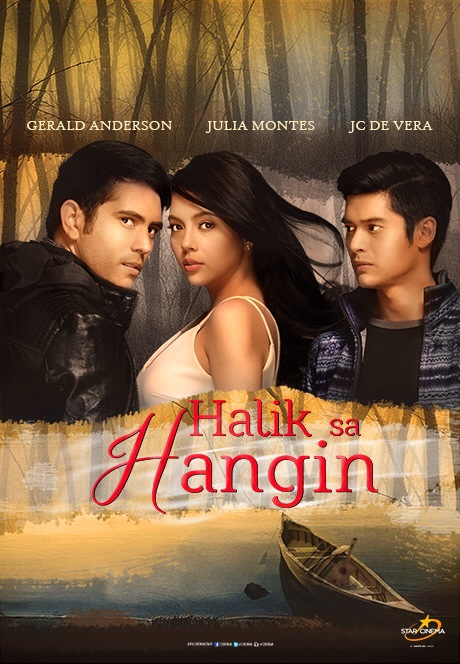 It is Mia’s (Julia Montes) first love but it may not be Gio’s (Gerald Anderson). She is consumed by it, made joyful, trusting, vulnerable. It is the center of her universe. She is 17, dealing with the death of his father and adjusts to her new family, new home.

Gio is, I don’t know his exact age but their age gap is close, he loves her immensely, but there is another part of him, elusive. He seems like he wants to be with her forever but at some point, he wouldn’t. His trouble evokes under a mysterious air.

Mia’s mom (Ina Raymundo) and stepdad (Edu Manzano) doesn’t know of her relationship with Gio. All they know is she’s grieving which is accepted as a natural part of mourning.

This is the premise, the set up for all that follows with notions of love, forgiveness, letting go, and a toss of paranormal.

Everything happens within a span of one month. Scenes are beautifully shot alongside the pine trees, luscious greens, and the dark, misty hills of Baguio City, which reminds me of the Jericho-Claudine-Diether starrer, Nasaan Ka Man (2005). The two films resemble in many ways but what differs them is the clear vision of the latter.

Halik Sa Hangin is filled with literal cautions and conversations, all tending to sound like goodbyes. Each lines are backed by a beautiful backdrop every time.

The film was a pleasure to watch. Technically, it’s been a long time since Star Cinema produced a romance film that doesn’t entail comedy. In reality though, the film is not entirely new; it also doesn’t quite succeed with the genre they are mixing with romance this time around.

To those who are more inclined to see the romance aspect might enjoy this film but to those who expect something more, they might be disappointed.

One hour and twenty minutes into the film and it seems like the plot is getting better, but the structure robs it of possibilities for a deeper and more refreshing narrative.

The screenplay planted clues everywhere that instead of using it as a device to tease, it only made the big reveal expected.

The film has ambition, that’s for sure, but it also lacks conviction. There were many attempts to induce scare but it becomes a missed opportunity, ridiculous to the point of humorous.

Now if you’re wondering where Alvin (JC De Vera) is all this time, his role doesn’t really hold much water as he’s one of the casualties of poor characterization.

There were also obvious editing and continuity issues in Halik Sa Hangin — Mia’s hair, her mode of transportation, the seemingly shoebox props in the park, the meet the family scene –all lacking consistency. At times some scenes even looked awkward and forced. SPOILER!

To say the least, it perfectly captures the feeling of blossoming romance, of how the romanticized idea of love can conquer all, and the shattered glass (or shattered picture, to those who’ve watched the film already) realization that it is also not be all with love.

Passionate love is very much where Mia is. She has never felt love before hence she is willing to give it her all. Gio’s love on the other hand is obsession, one that knows almost no boundaries.

Their story reminds us that first love is meant to be memorable and sweet. This film implies that after a certain point, it can also lead to tragedy.