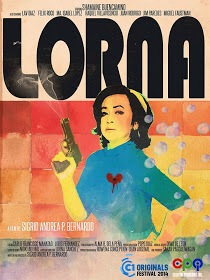 Lorna is a senior citizen fond of reading romance books. She considers the father of his child to be her soul mate but sadly, she’s the only one who thinks that way. After years of heartbreaking relationship with him, she decides to move on but “it’s not that easy,” she says. Along her process of recovery, she meets two men and hopes to find love, real love, finally.

The film, directed by Sigrid Bernardo, is a genuine and hilarious examination of a senior citizen’s life. It is easily laughable for the most part, but at its core is the reality of the fear seeping in our senior citizens –growing old, alone.

This may all sound familiar especially since 1st Ko Si 3rd was released but what makes Lorna a cut above the rest is the employed literary technique. The method paints a clearer picture of Lorna’s inner thoughts and emotions: gunshot to the heart, deliberate smoke effects, confetti and bubbles, all these add up to the charm of the highly entertaining but lonely life of our main character.

At some point, Lorna begins telling you Gary Granada-esque comparisons, “mabuti pa ang lapis may papel,” to name one, emphasizing how most things have partners and she doesn’t.

The cast, led by Shamaine Buencamino as Lorna is one of the memorable performances this year. The scene in the bed where Lorna is crying, as if there’s someone drilling a hole inside her, is such a painful sight to behold. Thankfully her son (played by Felix Roco) was there to comfort her.

Meanwhile Lorna’s friends, Miriam (Racquel Villavicencio) and Elvie (Maria Isabel Lopez) depict the contrast of acceptance and resistance to old age with humor and wit. Also notable is the inclusion of the critically-acclaimed filmmaker Lav Diaz as lover boy Rocky, sending kilig vibes on all corners of the cinema.

All in all, Lorna’s story shows charm at places people would rather hide. And for this film’s case, it’s never a bad thing.

In between all the botox fascination, blind obedience to abusive partner, infidelity, and taken for granted cases that these seniors face, there lies an acknowledgement (if not entirely acceptance) to the different kinds of love and pain that this world has to offer.