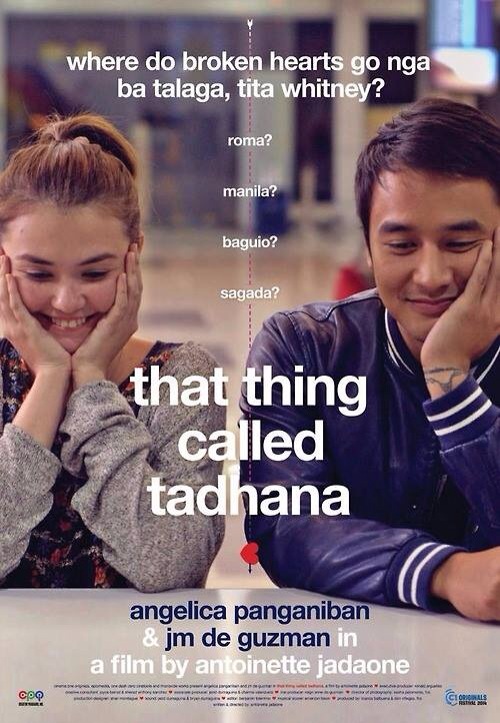 That Thing Called Tadhana begins in the airport where Mace (Angelica Panganiban) struggles to fit in all her belongings in the required baggage allowance. There she meets Anthony (JM De Guzman), a stranger willing to lend her some space in his baggage. This begins their friendship and an attempt to answer the question “where do broken hearts go?”

Antoinette Jadaone’s That Thing Called Tadhana has a small scope, having only two characters and a story that relates to something deeper and more poignant, resisting the kilig factor common to romance films.

It is about the two leads’ journey to Sagada in lieu of mending their broken hearts and the result is a light, heartbreaking, and heartwarming film.

Tadhana uses the first encounter concept, similar to Richard Linklater’s Before Sunrise, which made the film a thoroughly pleasant experience. The past is the villain so conversations were prevalent, but it was never a bore especially because they convey the ones that always hits home.

The film is generous with its usage of symbolisms. It will take you to the mountains, to the sky, and then back to your self. One instance is when Mace brings her two pieces of large suitcase up and down the overpass, seeking no help from Anthony. Another is the inclusion of Mace’s short story entitled The Arrow With A Heart Pierced Through It, reminiscent of Shel Silverstein’s The Missing Piece. Both show how a broken heart pretends to be strong but in reality, it’s something else.

What makes it poignant is that Mace and Anthony are the people we are, the people we were, and the people we will be, whenever our heart gets broken. They show us how sometimes, getting through a heartbreak is better if you have company.

The performances of the leads are affecting in a way that they fill in the shoes of the people around you, at times even myself, so easily. When Angelica Panganiban cries, I cry inside too. When JM De Guzman listens, I eagerly listen too.

Tadhana will leave you broken, hopeless, but ultimately hopeful, despite of it all.

Its simplicity is its beauty; its sincerity, divine. No words are enough to contain the amount of feelings this film has to offer. And the ending, Jadaone never tells what happens next. So just like in love, we crave, for more.