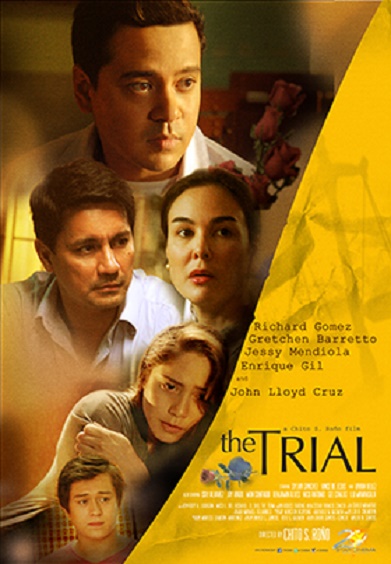 Chito Roño’s latest courtroom drama, The Trial, is a breath of fresh air in the series of rom-coms from Star Cinema. It is compelling as it tries to delay the reveal with a lot of banters pertaining to social and family issues.

Ronald (John Lloyd Cruz) is a 27 year old with a mind of a 13 year old. He’s working on getting his Elementary diploma while doing gardening tasks in school. Acting as his tutor is teacher Bessy (Jessy Mendiola), with whom he is in love with. One day, a video scandal surfaces insinuating him of raping Bessy. The school administration, who happens to be Bessy’s aunt (Vivian Velez), sees the video and files charges against Ronald, possibly putting him in jail once proven guilty.

From the start, it is apparent that Director Chito Roño’s vision is clear as to what the film is all about: not the courthouse drama per se, but more on family, identity, and a love story underneath.

From the fall out between Julian (Richard Gomez) and Amanda’s (Gretchen Barretto) marriage taking its toll on their son Martin (Enrique Gil) to the switching roles of Ronald’s parents played by Vince de Jesus and Sylvia Sanchez, who are struggling to live on a day-to-day basis but are happy. Briefly, it shows how a family’s dysfunctional tendencies cannot be blamed solely on how unconventional the setup may be.

Also, the film hints on prejudice among a specific demographic: the LGBT community. The film executes this part lightly with its comedic antics but it leaves a bold statement about their current condition.

It has many layers that add texture to the narrative but the ending felt like a mishandle of a teenager’s insecurities. It sheds light on how women, especially battered ones, choose their battles but they could have done more out of it, as it is a provocative angle indicating the power of women on rape cases.

When it comes to the actors, terrific casting did wonders for the film. Stellar performances from John Lloyd Cruz, Richard Gomez, and Sylvia Sanchez. These three portrayed their characters with much gusto and intensity; they all have scene stealing performances. The rest are good, but I find it bothersome that the judge was played by an old lady who doesn’t speak with enough credibility and authority.

Furthermore, the film asks us these:

The Trial is putting light as to how every character undergoes trial whether inside or outside the court. And it succeeds on that. Although I’d particularly like it better if they showed more of Bessy’s character.