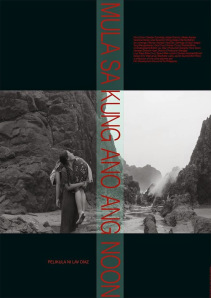 In Lav Diaz’s latest feature named Mula Sa Kung Ano Ang Noon, this is what he deals with –the beginning of repression, of resistance, of neglect, and of intrusion in a small barrio in the Phillippines before the Martial Law started.

Here he remembers fear, terror, and confusion, in an almost six hour epic about the beginning of the death of a country.

Contrary to his character focused feature Norte, this time Diaz focuses on the terrors surrounding a small town instead of focusing on the one causing the terror.

Most scenes detail the telling of the trauma looming over the town –the mysterious deaths of cows, the burning of three houses all at the same time, the slashing of a man’s throat, the death of a son. The film shows us how simple rural living is in its raw black and white form and how military men begin to cast fear in the townsmen with their mere presence.

From the healing ritual in the beginning up to the traditional burning of the dead in the end, Diaz touches on the roots of the town and the result is simple yet troubling.

Just as the troubled waves clash into the shore while Itang (Hazel Orencio) fuels her religious belief by paying tribute to the miraculous rock, to the avid spectators secretly watching from afar waiting for food, to the lies the townsmen committed, to the confessions– the film thrives with false beliefs and controversies which signify their tools for survival and how it paved way for a greater evil.

The actors are all top notch but I have to say it’s Sito (Perry Dizon), Joselina (Karenina Haniel), and Heding (Mailes Kanapi) who gave remarkable portrayals. They shine in all their scenes; no matter how small it may be.

By the end of it, you will feel that all the events were mere products of complacency.

Moreover, quality films, especially in a third world country, are more than good editing, good acting, and good script — it has to have social relevance. A film that stays away from the usual escape and instead shares a harsh piece of reality, one that challenges you to conform your problems is what makes a quality film. This is what ironically makes Mula Sa Kung Ano Ang Noon a masterpiece. A dark piece of history encapsulated in six long hours that it actually felt like eternity. What more if I was a part of that period…