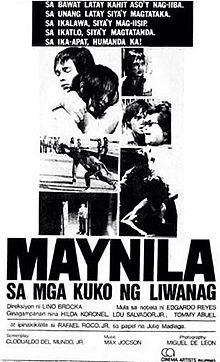 Watching this classic piece in 2014 brings me appreciation not just for Lino Brocka but in the Philippine cinema at the time. It proves just how beautiful a story can get without needing big budget.

Maynila Sa Kuko Ng Liwanag shows the decline of the city, but perhaps more importantly, the decline of our hero Julio Madiaga (Bembol Rocco). He arrived from the province with high hopes of seeing his lost love who is improbably named Ligaya Paraiso (Hilda Koronel) but the grim reality of the city took over his innocence.

By the characters’ names alone, even the street named Misericordia which translates to mercy or pity in Latin, it already depicts effective foreshadowing in the film.

Manila is portrayed here as as a representation of third world poverty. Then and now, nothing much has changed. Aside from the farm still present in Quezon City back then and the flickering advertisements that light up the city, Manila is still the same. And it’s quite a sad truth.

In the film, there were buried dreams, social inequality, prostitution, and women exploitation –one can’t help but lose faith in humanity. The city is literally sucking the life ahead of the naive provincial lad who want nothing but to find the love of his life.

The acting is simple, not entirely remarkable but the plot and direction makes the movie an excellent piece. Julio’s journey is a large chunk of reality that happens, even after almost 40 years since the birth of the film.

Also, I couldn’t help but compare it with Sean Ellis’ Metro Manila showing the same unflattering view of the city, this time from a foreigner’s point of view. The journey is the same and the climax is both unexpectedly good.

The ending sequence of Maynila completes the story on an emotional level. We end on redemption and eventual demise of getting eaten whole by the dark corner of the evil city. The camera pans to Julio who is stuck on a dead end alley with the whole neighborhood pinning him down. He wants justice and justice will be served, though apparently not for him, but to him.

Now I wouldn’t have to wonder why this piece is a classic. If you could catch it, please do. Maynila is not an easy pill to swallow especially with the themes it explored, but it’s a reminder that even though some things have changed, others stay the same.