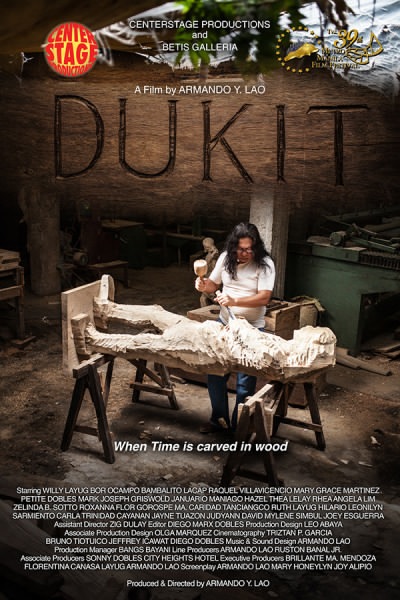 Director Armando “Bing” Lao’s found story set in Pampanga is presented with a nonlinear method of storytelling, encompassing three timelines. It tries to carve a plot that has an ample time to unfold without having overly melancholic tendencies and it works.

Dukit follows the tale of Waldo (Bambalino Lacap, Bor Ocampo, and Wilfredo Tayug), in the 60s, where he discovers his father’s infidelity, in the 80s where he’s now a newly wedded man struggling to make a living for his family, and the present as a respected sculptor trying to finish a religious image before Holy Week.

Come his birthday as a senior, Waldo’s wife Bebeng (Raquel Villavicencio) urges him to forget the past and forgive his father. But how can he do this if the party on the offense is not showing any remorse?

The film is a bit disorienting at first as it attempts to piece the time sensitive narrative together but all of these only add layers of emotion that contribute to the build up toward the end. Once you get the hang of it, you’ll find yourself watching a rewarding series of metaphors and allegories.

The editing is highly commendable as it smoothly transitions from different timelines without any warning, thus demanding careful attention from the audience. The ensemble is noteworthy as well, since the characters relay emotions mostly without words. And the natural sounds is a complimenting touch to the realism of the film.

Overall, the number of awards this film took home in MMFF (Best Film, Best Director, Best Actor, and Best Picture) are no doubt deserving. It is quite a remarkable feat how a simple story about forgiveness between father and son are carved beautifully under the chisel of the director. Simply put, Dukit is a work of art that takes time but it pays off.

Dukit was screened in Cine Adarna with a found story talk by Director Armando Lao right after the movie. For future screenings and other inquiries, please check out their Facebook Page.