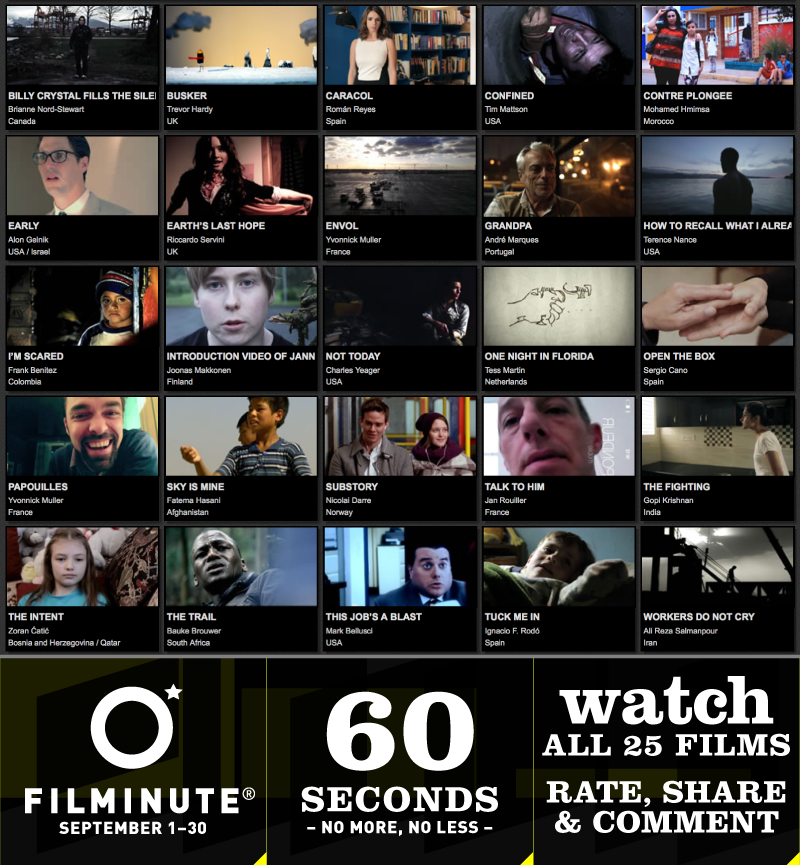 If you’re the type who doesn’t like watching long films as it might probably bore you, worry no more because Filminute is here for you.

Filminute is an international film festival that showcase a batch of well crafted films from various parts of the globe. The catch? The film should only be 60 seconds -no more, no less.

The festival, now on its 9th year, is available ONLINE for the audience to view during the whole month of September. And it’s for free! Aside from free viewing, audience can also rate and vote for their favorite film.

Unfortunately though, Philippines has no record of joining the said festival yet but hopefully we’ll see one next year!

Awards will be announced on October 7 so make sure to place your votes on or before Sept. 30.

Now on to the reviews: since these are shorter-than-short shorts, I intended to watch all 25 films in a day. And as a challenge I placed upon myself, I will write my reviews in 80 characters or less.

Here are my short reviews of the Filminute entries this year. Ranked according to its effect on me:

SKY IS MINE
Fatema Hasani
Afghanistan
The sky welcomes peace and nothing else. Quiet, simple, disturbingly beautiful. 9/10

HOW TO RECALL WHAT I ALREADY KNEW
Terence Nance
USA
There is beauty in the unknown and then there is the struggle. 8.5/10

ENVOL
Yvonnick Muller
France
Oh, the pains and beauty of love. I just hope it’s not yet too late. 8/10

NOT TODAY
Charles Yeager
USA
Such a kickass tease. Would love to see a full length film of this. 7.5/10

WORKERS DO NOT CRY
Ali Reza Salmanpour
Iran
There’s a bigger hand behind all these. 7/10

BILLY CRYSTAL FILLS THE SILENCE
Brianne Nord-Stewart
Canada
It tells, not shows. And it somehow works. 6/10

ONE NIGHT IN FLORIDA
Tess Martin
Netherlands
To be understood (and misunderstood) is necessary. 6/10

TALK TO HIM
Jan Rouiller
France
Original concept; conveyed a lot in 60 secs. 6/10

OPEN THE BOX
Sergio Cano
Spain
I chuckled. It’s as if a friend told a corny joke. But it’s packed with tension. 5/10

THE FIGHTING
Gopi Krishnan
India
Fight is a part of life, at times even a priority. Subtitles would be great. 5/10

INTRODUCTION VIDEO OF JANNE ANTTILA
Joonas Makkonen
Finland
Reality is blurred and so is the execution. 3/10

THIS JOB’S A BLAST
Mark Bellusci
USA
The joke’s a blast, literally but the film is not. 2/10

CARACOL
Román Reyes
Spain
Ummm, what does the fox say? 1/10

What’s your favorite entry this year?