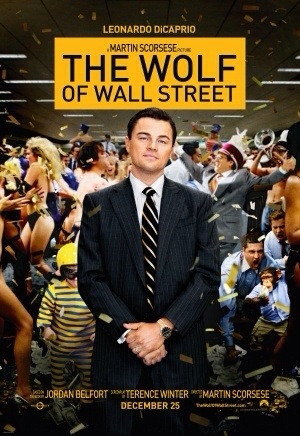 Contrary to what its title suggests, the 71 year old director Martin Scorsese’s most recent full length feature is not so much about the investment mischievousness. The Wolf of Wall Street is more about the excessive use of sex, drugs, and profanity all squeezed in three hours. Led by Leonardo DiCaprio, one can argue that the film needs cutting but since the content deals with the significance of excess, I don’t mind.

Here we see Jordan Belfort’s rise and fall as an investment broker. His mantra, “I always wanted to be rich,” kicks off a goal that follows and later on bends the rule of law. In between his job, we see him become a drug and sex addict who shows no ounce of regret at what he does except for getting caught.

The film depicts a thorough dissection of machismo greed to the point of disgusting. The office being a sex free zone from 9am to 7pm, proliferate drug abuse, and consistent debauchery, it delivers scenes in a fast, high energy, and unrestricted way.

Scorsese’s extreme long shots of work floors intensify the pandemonium surrounding the lead’s insatiable quest for greed. All these are done quietly but with a degree of unparalleled comic seriousness with Belfort trying to explain something and cutting his sentence right in the middle then starts talking to the audience directly.

The selling pen method employed in the beginning also wraps the ending neatly as the film tries to suggest creation of urgency as a necessary means to cope with the times and in a way becomes a reason for eventual greed. The inclusion of the Swiss Bank is also an inevitable touch as its become a familiar method for illegal minds to run there and hide their significant amount of wealth. Overall, the Wolf of Wall Street is a biopic that sends an indulgent message to women, to America, and the rest of the world. It offers a good cinematic experience as it underlines one big moral issue without tackling it directly.