What would you do if one day you discover an exact copy of yourself and he turns out to be an unlikely better version of you? Is he a twin, a doppelgänger, or just a stranger who happens to look like you? Will you have the courage to face him to end your questions?

This is the premise 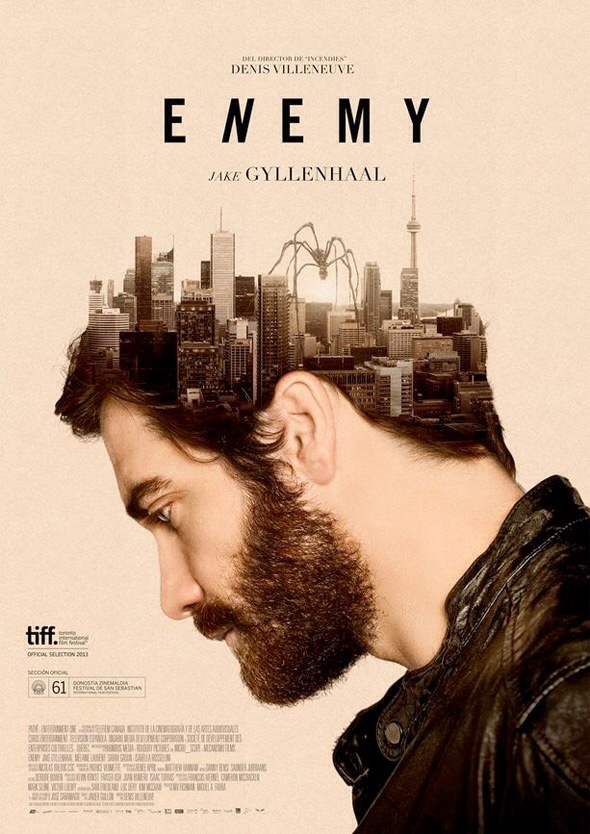 of Enemy, a psychosexual, arachnophobic thriller which stars Jake Gyllenhaal as Adam Bell, a History teacher stuck in the normalcy and redundancy of life just like his lessons in school. Upon a colleague’s suggestion, he picks up a movie and finds a bit player named Anthony Clair who looks and sounds exactly like him. He tracks down his lookalike and conflict ensues soon after.

The film may leave more questions than answers –a true mark of a Denis Villeneuve craft (Prisoners) –perplexing enough to be open to many interpretations.

The scenes present continuity and disruption of timeline, suggesting a non-linear narrative. Nothing seems to make sense at first. The way it was sewn as a whole leaves the viewer the task to think, solve, and be involved in puzzling the pieces together.

In the opening, there is an epigram saying “chaos is order yet undeciphered” quoting the book from which it was inspired by, Jose Saramago’s The Double. This quote becomes a foreshadow to the overall run of the film.

Meanwhile, the ending may enthrall or irritate some. My reaction to it was “WHAT THE FUCK!” my eyes wide open, forehead wrinkled, jaw dropped. It will leave you confused and dumbfounded.

A film like this requires the audience some careful observation and attention as it goes on telling without saying much.

This proves Director Denis Villeneuve effective in inducing fear and chills around a mind boggling storyline. It feels surreal. The spider is somehow similar to the notion of elephant in the room but with Adam’s case, it symbolizes entrapment and vulnerability, hence the creation of a doppelgänger.

The technical aspects of the film are worth noting as well. The camera works involving aerial shots of Toronto buildings, a few black out scenes, the overall nauseating yellow and brown color tones, the terrifying clarinet scoring, the acting especially from Gyllenhaal who successfully portrayed two different but somehow the same characters, and the supporting cast including Isabella Rossellini who was involved in only two yet vital scenes as Adan’s mom; Melanie Laurent as Adam’s girlfriend both clueless and naive to what is happening; and Sarah Gadon as Anthony’s wife whose stare pierces through your soul, are all worthy of praise. Everything felt like a well-made web that it’s hard to pinpoint where it even began.

The subconscious is an intriguing place to explore and with all that happened in this film, Enemy is surely a twisted yet brilliant piece of art.

Villeneuve’s attempt to disorient the audience is successful; leaving the key of interpretation for everyone to discover is certainly a gem on its own. A second viewing, even if it is an intended marketing strategy or not, wouldn’t hurt. After all, it’s natural to want to re-watch it especially with its premise.

Just a tip, once you’re out to solve the film: start from the end.

Also, would anyone give me a clue as to why the letter N is italicized in the poster? Villeneuve used this method before in Prisoners but with Enemy, I’m still clueless. I could only guess that it’s perhaps related to how you should view the movie, start from the eNd? I tried.