Begin Again is like a love letter, a plea, and a commentary to and on the music industry. It is full of musical references, including puns and praises, plus a beautiful soundtrack that magically hinges every arc in the story. It has cliché tendencies but it’s a feel good film with a style that will charm its way to your heart and leave you smiling all throughout.

Essentially, music is the core of Begin Again. Music operates on every character portrayed: on why Gretta and Dave drifted apart and why Dan is emotionally distant from his family. The film emphasizes that passion, when mixed with business is a solution for lost art. Eventually, music becomes a tool for them to mend what it has broken.

The film heavily tackles the wins and losses of signing a record label –how it could turn you into a star and how it would redefine an artist based solely on the market influence. It also shows how a single click can influence hundreds and thousands of people in this age of social media.

While the film has nothing brand new to tell, it goes away with a treatment that will win your heart, specifically by showing flashbacks through different perspectives. Musical scoring also serves as a foreshadow to the next scene and admittedly, director John Carney has good ears as all of the songs here will leave you wanting for more.

Armed with a polished set of color tones, Carney made the streets of New York city more inviting as Dan, Gretta and the rest of the crew begin recording medleys on rooftop, in pathways, and in subway platforms in lieu of trimming down expenses and to give off a more artsy vibe. 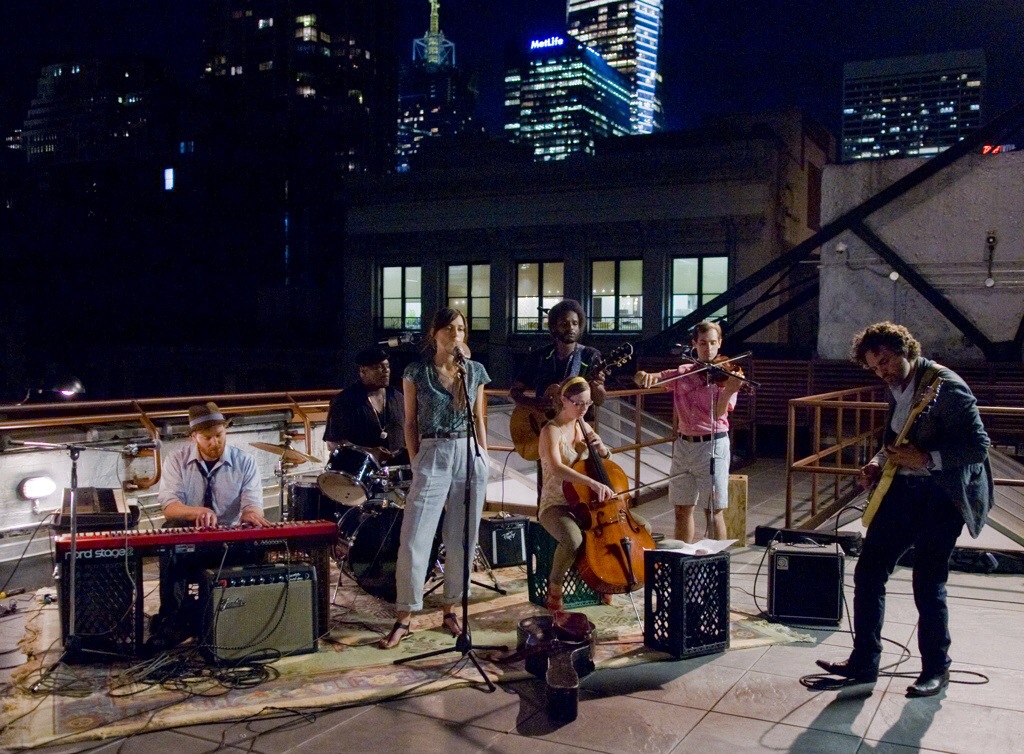 A scene reminiscent to The Beatles’ rooftop performance

One aspect I liked about Begin Again was the evolution of characters and the way each were given an allowance for mistakes. They were free from judgment or bias, and each embodies the official soundtrack entitled “Lost Stars” really well.

Dan (Mark Ruffalo) is a self destructive record executive, an alcoholic who has a disheveled relationship with his former wife and daughter. He handles family issues in a nonchalant way but when it comes to music, his ears are tailored to magically hear things when something beautiful comes his way. Meanwhile Gretta (Keira Knightley) starts off as a weak girl who becomes a strong, free-spirited woman after her break up with Dave (Adam Levine). Knightley stood out in this due to the revelation of her tender and sweet soulful voice that can infect you with its calm and soothing appeal. And there’s also Adam Levine who is unexpectedly a bliss to watch. This is his first movie acting stint and I wasn’t really expecting much from him but to his credit, he was likable even without the mushiness. A scene stealing moment for Levine was the one wherein he tries to seek forgiveness by reverting a song written for him by Gretta back to its ballad form instead of the one heavily manipulated.

Also appearing in a small but pivotal role is Catherine Keene as Ruffalo’s wife, a music journalist who is also a “lost star” in her own right. They have a child, Violet (Hailey Steinfield), a teenage who longs for a male figure in her life. Another character worth noting is Gretta’s ever supportive friend Steve (James Corden), who keeps everything lighter with his comic relief.

Overall,  the film exceeded my expectations for its wit and treatment. To anyone looking for a break from the robots, apes, and other fictional stories, this film which overflows with honesty is not a thing to miss.