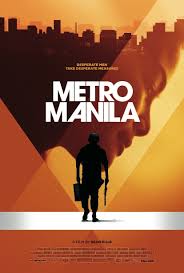 Sean Ellis’ film is a family drama that pulls up on a steady pace to reveal a thrilling heist, crime plot. Rather than sugarcoating the developing city, it presents the titular film on what it’s like living in the lower level of the hierarchy. It could get as cliche as it can be, but its storytelling differentiates it from the range of other Filipino films that tackles poverty and its domino effect.

Metro Manila begins in the province of Banaue, some five to six hours away from Manila. It cultures you to the simple yet difficult life of Oscar and his family who lives by harvesting in their rice field. One day they decide to try their luck in Manila and the plot revolves on how they try to cope with the city living.

The film is a gripping tale about a cautionary life that ends on a decision to make between a bad and worst case scenario.

A vividly realistic production, it portrays Manila’s bad side with its gritty, corrupt, violent texture however, it also displays the poignant and naivety of Oscar’s (Jake Macapagal) family who traded their life in the province. Maximizing the usage of flashback, subplots, intense action scenes, and at tomes hilarious quips, Ellis proves that he can make the a beautiful film, despite its dark tale. Every frame is alluring -the lack of excessive use of shaky camera technique, beautiful cinematography, and montage makes Oscar’s story a comprehensive account of losing innocence in every essence of it.

The acting from Althea Vega, Jake Macapagal and Mailes Kanapi are all topnotch, but I have to hand it to John Arcilla as Ong, the senior guard/driver who mentored Jake Macapagal’s character. I hate and like his character at the same time. To be fair, they all seem to play the victim card, but they play the rules of life in order to live.

For a foreign audience (ones outside UK since this is a  UK production consisted of Filipino cast), the overall editing, would seem close to flawless except maybe for a few geographical inconsistencies displaying places such as Munoz, Quiapo, and Makati as if they are near each other. But this is just a minor hiccup. I think the director just wanted to emphasize the highs and lows of the city. Nevertheless, Metro Manila doesn’t tell something entirely new but it’s a good film. Worth watching.