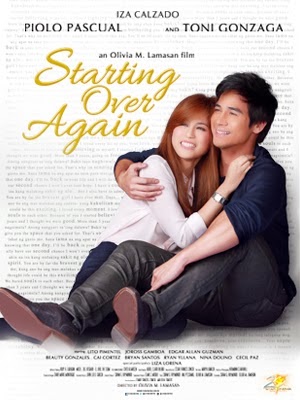 Following the story of former lovers Ginny (Toni Gonzaga) and Marco (Piolo Pascual) comes this highly talked about film with a different flavor.

Starting Over Again’s treatment veers away from the traditional spoon feeding trait common to Star Cinema films as it tells the story with flashbacks and varied perspectives, carefully exposing each side of the story. It has a plot that is entirely relatable, one major proponent why it will definitely score the box office, but it highlights a daring twist. To say the least, it gives hope not just to the audience who once loved and lost, but also to the ones hopeful of the future of Philippine cinema as it treads the right direction.

The film hints but almost never gives the possible ending; it plays the waiting game until it delivers the climax in a realistic grand reveal which is a great leap from the usual movie stints. Right at its core, Marco and Ginny’s story aims to put the audience on their shoes as it is something familiar, at times comic, but also real.

“How can you not forgive someone who made you a better person”?

The strength of the film relies heavily on its ability to make the audience think and feel as to why and how they choose to love (or let love go) in the first place. Similar to Marco’s letter, the film lets the audience experience the joys and pains of their former love. The vulnerability that comes with it, the strength, the pride, even the stupidity at some point, it all comes as a flashback by mere seeing a thing from the past.

Verily, it is a movie that thrives on feelings and it’s not hard to see that Ginny and Marco will easily be quotable as it becomes the crowd’s favorite characters in the years to come. And besides, this is an addition that an Olivia Lamasan film never disappoints.

In the end, the movie shows us a different kind of second chance. It teaches us that love, no matter how painful or boring, is something we have to choose, treasure, and keep. Because that’s the thing about love, you’ll only know its worth once it’s gone.