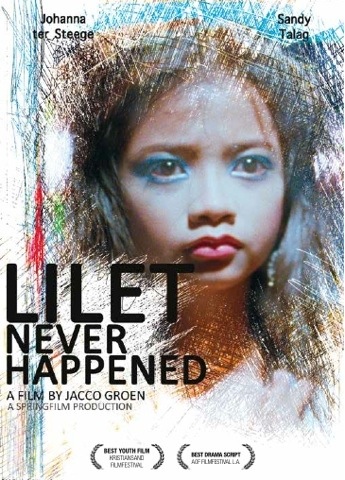 Growing up in the slums with her father, stepmom, and younger brother, Lilet or as others call her Snow White, dreams of one day becoming rich and famous, so she could save her brother from the rat life they are into. But the world isn’t so sweet for a twelve year old girl like Lilet.

The attention to detail and the truthfulness of this film is disturbing. With children running in the streets of Manila knocking on every car window to sell sampaguita garlands, begging for money, inhaling solvent, and sleeping on the streets, Lilet Never Happened is a micro view of the emotional and physical trauma that happens to a child whose only resort to living was to sell her body.

Living in Manila my entire life, I find these scenarios common and always thought that there could possibly be a syndicate behind the street children and so the least I could do was to hand them food instead of money. But as Lilet (Sandy Talag) was portrayed in the film, her parents were even the ones who pushed her to be a prostitute. It is terrifying to know that the people who should be the ones protecting her were the ones leading her to a life of waste.

Then Ms. Claire (Johanna ter Steege), an International social worker enters the picture. She gives Lilet a chance to change the course of her life again and again, but always fails. Being a rebel, hardheaded, and lost, Lilet grew into thinking that she can lead her own life and resort to prostitution as the only way to survive. Given the lack of guidance and education, Lilet narrows down her options but her hope of one day becoming a famous actress is still intact.

Sandy Talag’s portrayal as Lilet is remarkable; she owned the role. She’s a tough, energetic kid who fondly shows her love for her brother, gives angst and wit toward her oppressors, and makes decision with conviction. Talag is very natural. All the while it felt like I was watching Lilet not Sandy playing as Lilet. She curses, she fights with elders, she lights a cigarette –every little move she does is just amazing.

Jacco Groen is commendable for successfully moving the audience with a film that depicted the underbelly of child prostitution in the Philippines. Every frame is a discovery and each character offers something to feel sad or happy about. John Arcilla was here also, as Ms. Claire’s husband who dislike Lilet because, as he says, she teaches other kids bad things. He’s one of the few good men represented in a film with some sort of anti-hero aura but he isn’t anything close to being the movie’s villain.

Lilet’s story is just one. There could still be thousands out there who share the same story.